Localization Common Terminology You Should Know

Home » Our Blog » Localization Common Terminology You Should Know 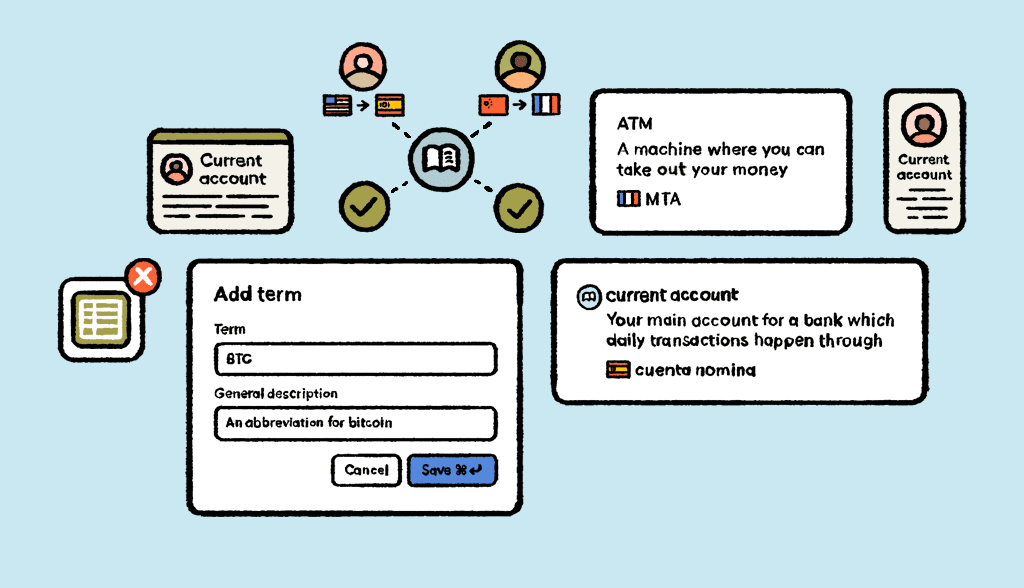 Localization common terminology participates in expansion, and customer satisfaction. Find out the meanings of most important terminologies.

Localization is adapting a product’s functional properties and characteristics to another language, cultural, political and legal differences of a foreign market or country. The main goal of localization is creating a connection that promotes the value of your product to the clients. Localization is not only an option for companies which want to go global, but it is now becoming a must, strategic plan that helps a brand to be known around the world. When you localize your website, products or marketing campaigns, you create a bridge to your target consumers and making your brand to be distinguished and outstanding in local markets.

It matches segments or sentences in translated documents as translation units or sentence pairs in a TM tool; the alignment tool matches the source and target language files side-by-side, to specify the similar pairs together. By creating translation memories through translation alignment, so you don’t need to translate the same sentence once more in the future.

It creates a bridge between single language websites and localization, Automatic Content Enrichment technology connects English words and phrases on web pages with pop-ups that have information in a user’s native language.

The script is read from right to left but has some exceptions in which other characters, for example numbers, read from left to right for European terms. Examples of bidirectional languages are Hebrew and Arabic.

It’s a group of symbols or characters that correspond to textual information in a language or language group. The characters available in an application program. The common is the ASCII (or ANSI) set of 128 characters, in which CAPITAL LETTER A has the code 41 in hexadecimal, 065 decimal, and 01000001 binary. Various localized character sets are ISO 8859-1 or Latin-1, the most common encoding of characters for Western European languages. ISO 8859-1 through 8859-15 are 256 character sets. The first 128 characters are the same as ASCII, and the upper 128 encodes Cyrillic, Hebrew, Arabic, etc. characters.

Using software for creating high-quality publications that merge text and graphics in a sophisticated layout following design standards. In localization it also includes the act of creating and keeping the look and feel of the original document once translated into other languages.

The symbols or shapes that show a character on the computer screen or on a printer. The mapping between character codes and symbols may be different on different operating systems.

A segment or sentence in a source document for which the TM tool has an identical match in the target language, including font style and various features like context.

Indication that words or sentences are partially – but not exactly – matched to previous translations, including font style and different features like context. Fuzzy match is when the match (during TM analysis) is not exact.

Using of human or machine translation for creating a rough translation of the source text which led the reader to understand the meaning of the context.

The term describes the process of designing, developing, and adapting a product in multiple countries. Globalization describes the process by which regional economies, societies, and cultures become overlapping through a global network through communication, transportation, and trade. G11N includes all the strategic and marketing preparation that goes into global distribution of a product.

A translation tool made to automate translation of website and other content that changes permanently. It supports content management, It makes individuals who don’t know HTML to manage the processes of creating, editing, archiving, and publishing website content. Common CMS systems include WordPress, Joomla, and Drupal.

A glossary also known as an idioticon, vocabulary, or clavis, it’s for the purposes of localization is a list of terms in the source language and their definitions, paired with a list of corresponding terms in the target language. Usually, a glossary exists at the end of a book and includes terms within that book which are newly introduced, uncommon or specialized. Generally, a glossary contains explanations of concepts related to a certain field of study or action.

The symbol GUI stands for Graphical User Interface and is synonymous with UI.

A keyboard shortcut is used to enter functions in menus and sub-menus. A hotkey is represented usually by a mnemonic which appears as an underline on the menu line.

A language-specific computer keyboard or a software tool allows any standard keyboard to input the characters or ideographs of a language. In case the symbols are more than the number of keys like in Asian languages, the software presents a selection of possibilities for clicking with a mouse.

An Input Method Editor is simple like a localized keyboard that shows the suitable character symbols for the local language. It may be a software program that works with a standard keyboard and mouse for choosing character symbols from an onscreen display. It produces character symbols after a sequence of keys has struck. More complicated input methods include graphic pads that recognize a character drawn with a stylus and speech recognition systems.

Internationalization is a process of product designing so it can be adapted to different languages and locales without engineering changes to support global markets. This process eliminates all cultural assumptions and any country or language-specific content is kept so that it can be easily adapted. It will be fixed during localization if this content is not separated during this step.

A feature added to an operating system that makes its keyboard and application programs to work in the character sets suitable to the language, and to render its fonts.

A combination of a language and a specific geographic area (often country) where the culture is distinguishing enough to use different terminology and web page designs.

A translation tool translates text automatically which is not previously seen based either on linguistic parsing or on similar text kept in a database.

It’s an artificial language uses annotations to show how text will be formatted. It surrounds text at the beginning and ending with tags set off in angle brackets. Translators must leave the words in the tags without changes. TM tools which are markup aware as Trados and TagEditor do not change tags, except for specific quoted material inside a tag’s features (e.g. HTML, SGML, and XML).

It refers to software that supports more than one language in the same time, so it allows the end user to choose multiple languages and formats. This software let data that has many languages to be entered, processed, and transmitted in many various locales.

It has the planning of updated files for translation as the existing files already contain related segments of the previously translated data. Only 100% of matches are replaced, as they’re a set of files containing both source and target language terminology, thus it avoids rework and extra costs.

A part of the document is usually separated from the rest of a text limited by punctuation – periods, tabs, paragraph marks, or custom tags. The phrase or sentence is the basic unit of information kept in translation memory with its corresponding bilingual matching phrase.

Alsun has a translation office dubai offering a wide range of translation services. We are always ready to serve you 24/7.

It’s an abbreviation for “simultaneous shipment,” the release of many product versions at the same time.

It’s the original language in which the product is localized.

Language into which the text is translated.

It is a database containing terminology and relevant information. Most termbases are multilingual and contain terminology data of different languages. There are fields in the database that are recorded for each term to define the concept, provide glosses suitable to a subject field and source information.

A database of collected words used to pave the way for high-quality translation.

It’s a software tool such as Trados MultiTerm that allows combination of the termbase in the translation.

A terminology list is often bilingual. It’s in a format like comma-delimited or tab-delimited files appropriate for use with a spread sheet.

It is a process that usually occurs in translation which makes the total number of characters in the target text becomes more than that of the source text.

It’s a segment or sentence pair in source and target languages together.

Now you understand localization common terminology better. You can also rely on our experts to help you understand the localization better through our professional team of native translators around the world. Each provider of Legal Translation Services in Dubai ensures that each translator of its team is fully aware of the above terms for ease of communications between team members and for good management of translation projects. We hope we help the community of junior translators with the above terms and tips that qualify them to be leaders of the translation market.

We offer a variety of services for our clients in the UAE including: